The Digital Arts and Design grad talks strategies for opening yourself up to opportunities.

Brandon Moore has a bucket list. It doesn’t live in his head or in a notebook – it’s not private like some lists. Brandon keeps his on the front page of his website.

A 2009 Digital Arts and Design graduate, Brandon currently works as a Graphic Designer for the Miami Dolphins. For many people, that would be a pinnacle career goal. And it is. But for Brandon, whose creative bucket list includes things like “Olympic Games brand identity” and “design the dashboard for a modern super car,” it’s just the beginning.

“I’m known for my work with logos and brand identity,” says Brandon. “I love football and doing branding, but as much as I love the work I’m doing now, it’s not the only work I want to do. When I got my job working with the Dolphins, I started thinking, ‘What are some of the other dream projects?’ That’s where the list began.”

I wasn’t even looking to get into sports design. In a way, it found me."

Brandon attributes his success to this attitude of openness. If you keep up with the design community and do good work, then opportunity is more likely to present itself – and you better be ready when it does.

For instance, he got his start in sports branding working for a local football coach (former UCF Quarterback Darin Slack) while he was still at Full Sail. Darin was traveling around hosting intensive camps for players. His business model was sound, but his branding was lacking. So Brandon reached out and offered to help.

“I asked if I could work with him, and he said let’s do it. I ended up working freelance for him for a few years,” recalls Brandon. “That led to more work in the sports industry doing logos and web graphics. I wasn’t even looking to get into sports design. In a way, it found me.”

A few years later, Brandon hit up Surf Melendez, the Miami Dolphins’ creative director, on Twitter. The two chatted about design, and when a designer position opened up a few months later, Brandon had a two-fold edge in the form of an existing relationship and a portfolio full of sports-based projects. He was hired soon after.

Now, he works with the Dolphins creative team on everything from yearly brand campaigns to daily content.

“For me, the fun part is the big picture stuff. Like when we release our schedule for the year – that’s a big moment,” he says. “Our branding, marketing, and social media doesn’t look different; it’s a little more polished, but we’re looking at the brand on a deeper level. How can we evolve over the next five to ten years?”

For now, Brandon is focusing on working with his teammates to make more engaging content for fans. And after that? There’s always something to strive for, he says.

“I don’t know that I believe that design can be timeless, but that’s what I shoot for. At the same time, I’m all about breaking through the status quo and figuring out ways for us to stand out from everyone else. We’re about evolution rather than revolution.” 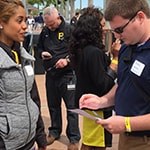 Sports Marketing and Media Students Network with the Big Leagues