Jameson Durall credits The Legend of Zelda with making him a game designer. As a kid, he was fascinated by the game's interactive and evolving storyline. Now, years later, Jameson's childhood love for games has evolved into a full-fledged career creating stories and gameplay for a number of titles, including The Simpsons: The Game and Red Faction: Armageddon.

Jameson got his start at Oddworld Inhabitants after graduating from Full Sail's Game Development program in 2001. There, he worked on the studio's critically acclaimed finale, Oddworld: Stranger's Wrath, before moving to Electronic Arts' Redwood Shores studio and working as a level designer on The Godfather: The Game and The Simpsons: The Game.

Following EA, Jameson joined the team at Deep Silver Volition, where he was a principal designer on Red Faction: Armageddon, Saints Row 4, and Agents of Mayhem.

More than 15 years into his career in the industry, Jameson is still grateful for the new adventures that he gets from working on video games. “When I look back at the path that I've taken, I feel like I've achieved what I always dreamt that I'd be able to,” he says. Today, Jameson has moved on to a new role in the burgeoning world of esports, as the Director of Esports Operations for Armada, Full Sail's collegiate team.

It's a lot of hard work, but there's times where you'll read a review about a level that you did and someone will be like, 'This part is awesome, I really had fun doing this,' and there's no greater compliment than that.”
—Jameson Durall 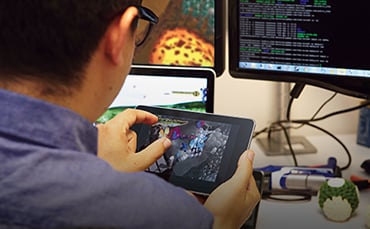